Welcome to our Author Spotlight series! This one is super special because we interview one of the WBP contributors, Katy Rose Pool (or Katy Rosé as we like to call her…when we’ve been drinking wine…) We’re so excited about her debut Young Adult epic fantasy, THERE WILL COME A DARKNESS (which is out today!). It is such an intricate world with multiple complex and fascinating characters that will suck you into a time when the prophets are all gone and one last (potentially apocalyptic) prophecy is left! 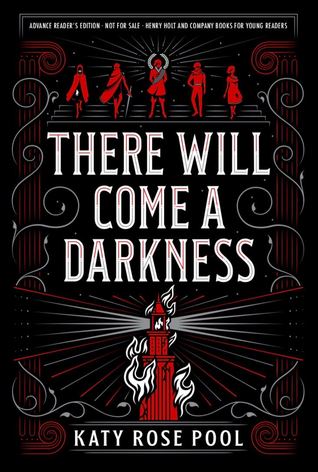 1. Katy! I’m so excited that you’re here to talk about your amazing debut! The first question is VERY important: Why are you so cruel?

I’m a Capricorn and we don’t feel emotions.

2. Hmmm, fine, that answer is acceptable, I guess. So, you’ve built up such a complex and beautiful world that holds and shapes each of the complicated characters. In particular the belief systems and religions are so well formed and presented. How did you go about shaping this world. What came first?

I say this a lot, but I really did start this project with the characters. Through them, I started to figure out some basics about the world. I also pretty early on had the concept of the Four Graces, which is sort of the magic system in this world. I love history, and so I spent some time figuring out the history of this world, which is sort of all influenced by the existence of these Seven Prophets. And then slowly (very slowly!) throughout many drafts the world came more and more together.

3. I know that your journey to making the book what it is now was a long and winding one. An aspect that I loved was how it started out as an adult fantasy. Can you talk a bit about how you ended up realizing it was Young Adult and the process of shifting it to a YA voice (or if revising for that was even necessary at all)?

I usually say that it was my agent who told me she felt this was a YA book, but truthfully I had been getting that feedback for a while before she read it! My sister, who is my first beta reader, and some of my CPs (looking at you Aks!) had already expressed that it felt like a YA book. Still, I queried it as an adult fantasy, because at this point (this was 2015) there just weren’t a lot of YA fantasies that had this sort of complicated multi-POV structure, so I didn’t see a place for it in the market. On our first call when my agent said she saw it as a YA book, I felt a real sense of rightness. I was already working on another YA project and knew that I wanted to write in that category, so I was really glad that my agent had the foresight to see that the market was shifting (Six of Crows came out that very fall and did amazingly well, so she was SUPER right!) When it came to revising it, I honestly did very little to “make it YA” — I aged down a couple characters and I definitely clarified the worldbuilding a lot, but that was to make the book better, not to make it YA. I’m very happy with where we landed, and excited to see how the YA fantasy genre continues to grow!

4. At what point in the writing or developmental process did you realize you had to tell the story from multiple POVs?

That was something I knew right off the bat. I had all these characters and I knew they were all connected, so I started out writing their separate storylines, knowing only how they would end up intersecting. It actually took a few drafts for me to figure out the central conceit and the overarching plot device that tied them all together (the prophecy) so for a while I just had all these interesting characters crossing paths in the midst of this chaotic world, without really knowing why!

5. Throughout the book each POV character have integral influence over the overall plot which seems like such a hard feat to pull off. Did that take a lot of pre-planning? Or was it something that came about organically via many revisions? (aka are you a planner or a pantser)

I would definitely say I semi-pantsed this book, which sounds absolutely horrifying considering how complex the plot is. But I knew how each character would intersect with one another, so I wrote toward those moments. I definitely did NOT know the ending when I wrote the first draft, and that I ended up banging out in about three days (and then rewrote several times).

6. OMG, I have so much respect that you pantsed this amazing complex book! But, it also makes sense that you discovered more each time you revised/rewrote! So, which POV is your favorite to write in?

TRICK QUESTION! I really do enjoy them all for different reasons. I think the easiest to write is probably Jude, because he just has a lot of feelings all the time, yet he doesn’t really know how to express them, which is something I always enjoy writing. Hassan’s chapters always get written fairly quickly because he’s such an active character–he’s always doing things and making choices (sometimes bad ones) and plus he knows so much about the world so I can always sneak some history and background into his chapters. Anton is such a delight to write because he can be so funny–at the same time though, he has this super deep vulnerability that I really like drawing out. Beru always surprises me with her chapters–she has such poise and grace and a will of steel that I love to explore.

7. Beru is so quietly strong and I legit didn’t realize how much I loved her until I was willing do DIE to protect her! So, which POV was the hardest to figure out?

Ephyra is probably the most difficult to write because she’s so ruthless and singularly focused, but I love writing her Pale Hand scenes. While I have fun writing Hassan scenes, his storyline probably changed the most throughout the course of revising this book, so I always affectionately call him my most problematic child.

8. That makes so much sense. I respect and fear Ephyra (as she deserves!) Speaking of Ephyra, she is a very morally grey character. And in fact, none of your characters are innately good or bad, they all live very firmly in the grey areas. Yet your story harkens back to familiar themes of classic fantasy telling where there is often a true hero that rises up against a clear evil. What made you decide to do away with those clear tropes and how did you go about building characters that do bad things yet are still people that the readers root for?

I don’t really think it was a conscious choice to turn away from those tropes, it was just a product of me writing the type of thing I like to read. I love characters that are morally complex, and even more than that I love when their values come into conflict with one another–either when the characters themselves are in conflict, or when they are allied but have very different reasoning for what they’re trying to do. I think I’m willing to root for a character who does almost anything as long as I can understand why they did it. Writing flawed character is just so much more interesting and true than writing characters who always do the right thing without fail.

9. What has been your favorite part of the publishing/debuting process so far?

Ahhhh so much of it! Getting to connect with readers, whether that’s at San Diego Comic Con or on instagram, seeing people get excited about my book and loving my characters. I’ve also just really enjoyed working with the team at Macmillan. It’s an absolute trip to go from cultivating this little book on your own, to having a whole team of people who are excited about it and invested in it and who believe in you. It’s so validating and it makes all the celebratory moments even better.

10. Finally, a question that I must get the answer to! Will my sweet baby angel Anton be okay?

Everyone check out THERE WILL COME A DARKNESS, out now! Available wherever books are sold!

Katy Rose Pool is a writer living in Berkeley, California. She grew up in Los Angeles, where her screenwriter father taught her about three act structure, characterization, and inciting incidents all before she could tie her shoes. Katy studied history and English at UC Berkeley. She enjoys breakfast sandwiches, fancy cocktails, rooting for the Golden State Warriors, and books that set her on fire.

Katy is represented by Alexandra Machinist and Hillary Jacobson at ICM Partners.

Her debut novel There Will Come a Darkness will be out September 3, 2019 from Holt Books for Young Readers/Macmillan.