Today at Writer’s Block Party we are super proud and honored to host Ellen Oh & Elsie Chapman for an exclusive interview to celebrate the release of their newest anthology, A THOUSAND BEGINNINGS AND ENDINGS, out next week, June 26! Enjoy the wise & down-to-earth answers of these creative geniuses, and check out the giveaway below! 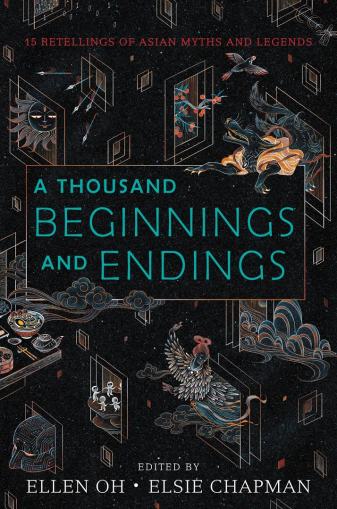 Elsie: I’m so happy you’re excited to read! When Ellen and I first started talking about doing an anthology together, we knew right away we wanted to feature authors of colour. And as we talked, with us both being Asian, it kind of naturally led to us talking more and more about doing an anthology with Asian authors. Then when we hit on the idea of retelling Asian mythology on top of that, we knew that was it, it was exactly what we wanted to do.

Ellen:  When I first wrote Prophecy, my YA fantasy set in ancient Korea, the responses I got from it were quite heartbreaking. From the agent who told me that the thought of ancient Korea bored her, to the reviewers who insisted that there were far better Asian fantasy books out there, all written by white writers, it has been a painful experience. And it is deeply frustrating to see “Best Asian fantasy books” lists that recommend only culturally appropriative books by non Asians. So the idea of an anthology of fantasy stories told only by Asian writers has been on my mind for a long time. I’d already edited the middle grade anthology Flying Lessons for WNDB and we had contracted the YA version (Fresh Ink with Lamar Giles editing) when Elsie and I started talking about doing another anthology. So for me I knew it had to be all Asian voices. I wanted to put the Asian back in Asian fantasy and how better to do that than to retell classic Asian myths and legends. Once we knew the plan it was easy getting all our contributors on board and now we are the proud editors of this incredible anthology of stories that celebrate our Asian heritage.

Elsie: In my mind, fairytales and myths are stories about human nature at its messiest, and I think that’s why readers are so drawn to them. They read about heroes wanting good things but maybe considering bad things to get them, and about villains who are maybe that way by circumstance—who doesn’t relate to that, right? But even as I was a Chinese kid growing up in Canada and loving reading mythology, it never occurred to me even once to wonder why nearly every story was Eurocentric. That’s how dangerously easy it is for a kid to normalize who is interesting enough to get to tell stories, and who is pretty enough to get to star in them, and for me, it was white people and hardly anyone else. And it becomes this cycle, where you grow up actually believing this and then you have kids of your own and you’re exposing them to nothing but those same Eurocentric stories. So this is why I think having more Asian fairy tales and mythology in school libraries for young readers to find is so important, right alongside all the Greek and Roman myths and Grimm fairytales that I still love. All kid readers should have the chance to read myths of how the Chinese Zodiac started, or how the entity Pan Gu created the world.

Ellen: When I was little I devoured the Andrew Lang fairy tale books that came in all the different colors. Every once in a while there would be an Asian fairy tale but I never felt satisfied. Fortunately for me, my parents would tell me all these amazing myths and legends of Korea and I always wondered why there weren’t books about them in the library. I mean fairies and elves are great but I wanted more stories about Kumiho’s (nine tailed fox demons) and dokkaebis (Korean trickster goblins that carried magical clubs) and gwishin (terrifying Korean ghosts). I wanted something that grounded me in my culture and heritage. That’s what this anthology does. And it also shares with western readers myths and legends that they’ve not been exposed to before.

Elsie: The cover is absolutely gorgeous, and I loved it as soon as Martha Mihalick (our editor at Harper) showed it to us! It’s just this perfectly balanced compilation of Asian motifs and symbolism and elegant timelessness that I think really captures the feel of the anthology. The amazingly talented artist Feifei Ruan created it for us, and you can see more of her gorgeous artwork on her website: http://feifeiruan.com/

Ellen: To be honest, in order to talk about the cover, we have to talk about the title. We had the hardest time coming up with titles until I was reading Preeti’s story and she had the line ” She could see the thousands of beginnings and endings she had and would endure. She was ready for this story.” And as soon as I read that line, I knew it was the title. It fit. And that title is what inspired the cover. For the cover, we were looking for a specific look. Something that was Asian in feel without being stereotypical Asian for example, no Wonton or Chop Suey fonts which are so racist. And when we were looking at the wonderful artists that were being considered, I think Elsie and I immediately gravitated to Feifei Ruan’s art style for what we wanted and she delivered beautifully.

Elsie: Before working on anthologies, I never realized how much more impactful a collection of different stories can be when it really comes together as a whole, versus each individual story simply being sound in and out of itself. For example, with HUNGRY HEARTS—which I’m co-editing with fellow YA author Caroline Tung Richmond—we’re interconnecting stories via a shared setting, which helps the reader stay involved story to story. And so with this anthology, in my mind, I really wanted to touch on all different kinds of stories—from love stories to heroic quests to tragedies—to really show just how much range there is within Asian fairy tales and mythology. When I think about classic Greek mythology, I don’t just think of Zeus, but also of Perseus and Medusa, and Apollo and Daphne, and I’d love for readers to have that same kind of experience with A THOUSAND BEGINNINGS AND ENDINGS.

Ellen: Working on an anthology is a lot of work. You have to get all of your authors, negotiate all the rights, draft all the contracts, read all the stories, and make sure they fit your unifying theme of the anthology. Since my background is contracts law, I end up handling all the legal aspects of contracting for the stories. Something that I thought I’d put behind me when I stopped practicing law. That part is tedious and no fun. But seeing all the stories through the editing process to final is an amazing experience and truly rewarding.

Elsie: I don’t have an ultimate favourite fairy tale—I love too many to pick! And while a lot of Chinese fairy tales/myths become stage productions or live-action movies—Jackie Chan’s Drunken Master loosely refers to the myth “The Eight Immortals” when his character learns “The Eight Drunken Immortals” fighting technique—I don’t know how many get animated. I’d love to see “The Eight Immortals” get this treatment. It’s the story of eight humans who turn immortal, and each has a power that becomes a tool that can either give life or fight evil. I’d watch any of this animated in a heartbeat. In the meantime, I found out they once appeared in a Marvel comic and fought the X-Men, which I’ll now have to go look up!

Ellen: My favorite fairy tale of all time is about this warrior girl named Kira who has the ability to see and smell demons that enter the world and everyone thinks that the hero of the Dragon King prophecy is her cousin, the prince, but they are all wrong because it is really her… I think the fairy tale is called Prophecy by Ellen Oh. :o)

Born and raised in western Canada and a graduate of UBC with a degree in English Literature, Elsie Chapman currently lives in Tokyo with her family. She writes books for kids and teens. She is the author of the young adult thrillers Dualed and Divided as well as the YA mystery, Along the Indigo. Upcoming: All the Ways Home (Spring 2019) &  Hungry Hearts (Summer 2019) 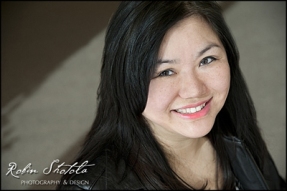 Ellen Oh is co-founder, President, and CEO of We Need Diverse Books (WNDB), a non-profit organization dedicated to increasing diversity in children’s literature. She is also a former adjunct college instructor and corporate/entertainment attorney. She is the author of the YA fantasy trilogy The Prophecy Series and the MG novel Spirit Hunters: Book 1. Spirit Hunters: Book 2 will be published Summer 2018.

Enter for your chance to win a pre-order of A THOUSAND BEGINNINGS AND ENDINGS!

EXCLUSIVE – Author's Spotlight with @ElloEllenOh and @elsiechapman and a pre-order #Giveaway for A THOUSAND BEGINNINGS AND ENDINGS. RT & follow Ellen and Elsie to win. Ends June 24 at 11:59pm ET. US Only. https://t.co/O75HWRoEIz pic.twitter.com/wiyVS5oIRv