We love spotlighting debut authors on Writer’s Block Party and we were lucky enough to get an interview with the wonderful Heather Kaczynski on her Book Birthday! Heather is the author of the Young Adult Sci-Fi DARE MIGHTY THINGS out today! 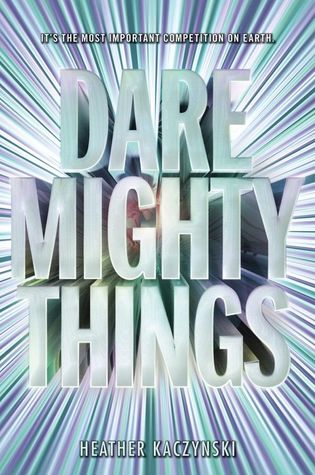 Dare Mighty Things is about an ambitious, intelligent teenage girl who competes for a chance to achieve her dream of going into space, in a near future where NASA no longer has a budget for human spaceflight. But first, she has to defeat 63 other contestants who are just as smart and ruthless as she is.

2. It’s so cool that your book takes place at NASA! We know that you’ve visited NASA before, did that inspire your love of space or was it the other way around? Are there any real-life loves you incorporated into DMT?

NASA definitely inspired me. Since I grew up in Huntsville, home of Space Camp and a lifesize replica of the Saturn V – which we all basically use as a landmark since you can see it all over town – the space program has always been present and relevant in my life. As a kid, everybody went to space camp (except me, boo) and it was really common to have friends whose parents were rocket scientists.

Growing up, I basically assumed everybody cared as much about the health and future of the space program as we did. But as an adult, I learned that wasn’t necessarily true. I began wondering what we’d become as a society if kids were growing up not dreaming about space and wanting to be astronauts. We have to inspire and encourage kids to be interested in science and exploration if we didn’t want to stagnate – we have to always keep moving forward.

And yes! I definitely incorporated some of my love of scifi stories and Mass Effect into DMT – if you’re a fan of the series, you’ll probably notice some small nods to the games. 🙂 The reason Cassie starts off the book working in the legal department is because my coworker’s husband, who works at NASA and helped me out with a few things, is a lawyer in the legal office. So there are nods here and there.

3. Even though your book is a sci-fi, it felt incredibly realistic, especially the scenes that took place at NASA headquarters. What research went into building this world and concept?

I actually visited Marshall Space Flight Center as part of a #NASASocial event, where NASA invites members of the social media public to go on behind the scenes tours as a way to get the word out to the world about what NASA is working on. We learned info about the new Space Launch System that they’re building partially at Marshall – the largest and most powerful rocket to date – which could potentially take us to Mars and beyond. It was incredibly exciting to be there on the ground floor!

I also interviewed astronaut Randy Bresnik, who is currently the commander of the International Space Station, about what it feels like to go into space for the first time.

4. What are some of your favorite films or TV shows that take place in space?

I loved the first Star Trek revamp with Chris Pine! And I can’t wait to watch the new Star Trek Discovery – I grew up on Next Generation – but right now I’m loving Killjoys! (And yeah, I liked Firefly, but I liked Serenity more tbh.)

5. If you were given the chance to go on a colonization mission to space, but wouldn’t see your friends or family ever again, would you take it? Same question, but you can take your family.

1. Absolutely not! 2., Maybe, if everything was proven to be SUPER DUPER PROVEN SAFE, and we weren’t the first ones going. I like exploring danger in fiction, but I like my real life to be nice and safe!

6. I loved how diverse the cast of DMT was. Did you have a character you loved writing about the most? If you could give one character their own point of view, who would it be and why?

Oh thank you! And  yes, omg, Emilio was the most fun to write. He’s like a puppy in human form. But I think Hanna would be the most interesting person to have their own POV, because you never quite know what she’s up to behind the scenes…especially what she’s getting up to in book 2.

7. You have some really cool reveals in the book. Also it’s a competition, so there’s that added element of tension as contestants drop off one by one. How did you keep it suspenseful the whole way through?

I think keeping suspense going through a whole book is a balancing act of giving out little reveals as the characters earn them, slowly turning up the weird, while never giving away enough that the reader jumps ahead and figures out the ending on their own. Having a twist ending means you need to have dropped clues throughout the book that readers don’t notice their first time reading, so when they get to the final page they see the puzzle come together – and they’re not left going “what? huh? where did THAT come from?” – surprise them without confusing them. I hope I achieved that balance, haha.

Are you a pantser or a plotter?

I think of my method as kind of a stepping stone situation. I know the major plot points going into it, maybe even a few ideas of the different possible endings, and I pants my way from point A to point B to point C.

Drink of choice when writing?

Chai latte or coffee with like a half cup of pumpkin spice creamer.

Favorite part of the writing process (drafting, revising, etc) and why?

I love revising, because that’s when I can actually make the book make sense. Drafting DMT was the most fun I’d had while drafting, ever, but that magic doesn’t happen often. Drafting book 2 was like pulling teeth. I would much rather have words on the page to fix than a blank page to fill.

DMT was my second finished novel. I’d started multiple stories in the past that never made it further than 30 pages. (I got really lucky.)

GIF your debut journey so far.

Well, Kat told me I could only use like 5 gifs so I’m gonna try to condense all the feelings down to these:

Question from Axie: Tommy from Peaky Blinders or Heero from Gundam Wing?

Tommy all the way. At least he has demonstrated the capacity for love. I feel like you could really help him with his demons! Whereas…Heero would probably just kill you to stop himself from Having Emotions.

We’re giving away a copy of DARE MIGHT THINGS!

There are two ways to enter: