We saw this tweet by agent Beth Phelan and realized that a series on what authors want and need from their agents is a way to pay it forward to writers in the query trenches. This isn’t something as basic as “I want an agent at a good agency” or “I want an editorial agent” but more about the nitty gritty about what we think makes our agents good for us and our career. Things we’ve learned since signing with them that we’d never have known to ask for/look for before. So we’ve invited authors at various stages in their careers to anonymously talk about their agent experiences in a feature we’re calling “Fantastic Agents and How to Find Them.”

The goal of this series isn’t to tell anyone how an author-agent relationship should be, but rather to showcase the very wide range of experiences out there. Everyone wants and needs something different from their agent, and we hope that by reading the varied thought processes of our guest contributors, writers can begin to figure out what might work best for them.

If you’d like to be a featured author in this series please email us at writersblockpartyblog@gmail.com or use our contact page! 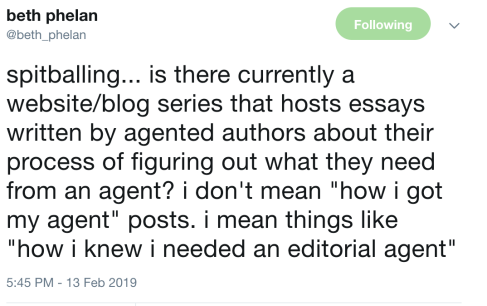 Age Category: Young Adult
How long you queried before you found your current agent: 2.5 years
Have you had prior agents?: No

Are you published and/or do you have a book deal?: Book deal

I am an anxious person, so as a new/debut author I really needed someone with industry know-how to give me some guidance to let me know I was on the right path (regardless if it turns out I knew what I was doing or not). I knew my limits and lack of self-confidence was always a constant issue with me with my writing. Knowing that, I went into the search for an agent knowing I needed an editorial one. So I searched interviews and bios to make sure every agent I queried had mentioned, at some point, doing editorial work with their clients. I love working with my current agent because we’ve had really candid conversations about her path into working as an agent and how she seriously considered a job as an editor at first. Her passion for editorial helped me figure out how to embrace my writing and make it shine for submission. It was also important for me to have an edit letter that had clear opinions instead of just giving me praise. I wanted someone who wouldn’t shy away from telling me where they thought I could strengthen things.

For me, the whole revision process with my agent took over a year. Which stressed me out. And at the time, I was too scared to ask her if that was a bad thing or not. (If I could go back I’d ask her as soon as I had that fear, because my agent is really good at explaining her reasoning behind everything). At the end of the day, I am glad I took that time, not only because the manuscript was the best it could be (at that time and with my abilities then) but also because I was much calmer and clear-headed at the time. I got my agent after a big public event and I felt all the stress from that event for months after. I felt like all eyes were on me (which was a silly concern). Taking time to get my head in the game and concentrate on my story instead of the perceived audience, helped me be calmer during submission. At the end of the day, my agent knew what was best for me and my manuscript and after this experience I have all the trust for her and her process.

There’s also the fact that I watched her sign other authors after me and sell their books before I was on sub. (And some writers she’d signed before me were also still revising). I mention this because that was a good thing to see. It was clear that she catered the process for each individual writer’s needs. She wasn’t just churning out books for sale with a set rubric. She was giving us all what we needed and didn’t base anything on an arbitrary deadline or formula. In that way, it helped me feel confident in the work we were doing together. I knew that she was giving me what I needed.

I also wanted an agent who would clearly and efficiently answer my questions after I ask them. I definitely did not expect replies immediately, but within the work week (unless there were extenuating circumstances) was important to me. I got that and more from my agent who replies to let me know she’s at least received my questions and lets me know how long (estimated) it would take her to get answers if she doesn’t have them immediately. It’s really good for my anxious writer brain to have such clear and constant communication. When it came to submission, I never actually asked for a specific kind of communication. But I never had to. Of course, I do not think it’s reasonable to want an agent who psychically gets you, but it was a pleasant surprise to have one that reached out to me just enough to keep me in the loop (she sent me updates on where my MS was with editors when she had concrete information) but didn’t overwhelm me (she kept a rejection for a couple of days before sending it because it came in on my birthday :sad emoji:). If I were to go back, I might have been more clear about what I needed at the time (but the sad truth for me was I didn’t know what I needed until I had it).

When it came to the actual negotiation of the contract, I have to say that my agent is the best. Period. I mean, I don’t know other agents, but I’m pretty sure my agent is the best. She was very good at explaining each part of the contract and how it would affect me, my writing, and my schedule. She also asked very clear and concise questions about what I wanted as she did the verbal negotiations. For this, it was via phone calls so I could actively ask for details to clarify what the best options were. She also never pushed her opinion on me. In this, I guess I have my only thing I’d like to change so far. I wish she was more opinionated about things sometimes. I love the support I always get and I love that she makes sure all the decisions I make are because I want them. But I am also so indecisive it’s debilitating sometimes. This is obviously not something I told my agent immediately, so there was no way she could know this. But I personally do like hearing other people’s opinions especially when the decisions are big. But, that was just an issue of communication, and I know I can ask my agent for her opinion now (and more importantly, I can trust her opinion). Also, a note that this is very specifically something I need. Agents should not be pushing their opinions of you if you don’t want or need them. Every business decision you make should be based on what you want, not what your agent wants.

If I could change anything about my agent search, I wouldn’t have been as desperate. This is not commentary on anyone but me. But my first round of querying I was so scared I wouldn’t find an agent that I started querying agents before I did full research. This could have led to me accepting an offer from someone who wasn’t the right agent for me. The second time I queried I was much more strategic and that’s why I truly believe it’s worked out so well. The agent I have now is one I knew would be great for me before I even hit send. However, we always make mistakes that we can only see in hindsight and if I had to do it over again I’d have asked more questions of the agent’s clients beforehand. Just gotten to know her work style and vibe. Asked for more details about the day-to-day stuff and how that plays out between the agent and her clients. I was lucky because her work style ended up being perfect for me. But I do hear stories of people who didn’t realize their agents would be so blunt or wordy or distant or [insert random personal work style you didn’t anticipate]. It’s not that these things would be deal breakers, it’s just that it’s nice to know ahead of time so you can prepare your expectations.