Literature and Latte, the developers behind everyone’s favorite novel writing software Scrivener, got everyone in a tizzy last fall when they announced they would be releasing a new major version of Scrivener. As longtime Scrivener devotees, Akshaya and I were very excited to get a look at the promised new features and improved functionality. Unlike past updates to the software, Scrivener 3 is a new major release and requires a purchase of $25 to get access to the upgrade.

Now it’s been a few months since the new version came out and we’ve had time to evaluate the new functionality and features and we’re here to answer the question many of you are asking — is upgrading worth it?

We each have our own ways of using Scrivener for our writing processes, so we hope that by combining forces we can provide a broader spectrum of opinion. Additionally, I (Katy) am a professional web developer by day, so I hope that I can shed some light on that perspective as well.

Akshaya: The project bookmarks feature is pretty self-explanatory, but basically you can bookmark documents within Scrivener that you visit often and access them quickly without having to dig through your binder. I love how easily accessible it is even in composition mode, both in the inspector as well as the navigation bar at the bottom of the page.

You can bookmark pretty much anything you want, but here are a few things I’ve found helpful to bookmark:

In addition to the project bookmarks, there is also the option to have bookmarks specific to each document, which includes external links to files and websites. I haven’t used it much yet, but I can see how it could be helpful to use the document bookmarks as reminders to make sure I incorporate specific information into a particular scene.

Akshaya: The split screen feature has always been one of my personal favorites, even in the older Scrivener. I like being able to see my full outline on one side of the screen and have the actual chapter I’m drafting or revising open on the other. With copyholders, you can also have a third (or fourth) document open without having to go back and forth within the binder.

As you can see below, I usually end up defaulting to one of my bookmarks for what goes in the copyholder. But again, you can put literally anything you find useful there. Keep in mind though that the copyholder is static. While you can control what is displayed in the other screens via the binder, the copyholder won’t change unless you manually replace it with another document (or you have the “automatically open selection in copyholder” button selected).

Katy: With the new Scrivener corkboard, you can separate out your chapters or scenes by their label color, so they will appear chronological, but every card with the same label will have its own “thread” (and you can display these threads either horizontally or vertically). Here’s what it looks like for my book, where each label color represents a different character’s POV:

Akshaya and I were both super excited about this feature at first, because we both write books with multiple POVs (as you may have read about). While it is kind of cool to see your chapters laid out for individual characters or plotlines like this, we both agree that this feature would be more powerful if it allowed you to visualize each note card not only by label color, but also by keyword or other metadata.

Akshaya: The idea of this feature is that there are pre-existing layouts you can use to view your manuscript in different ways. 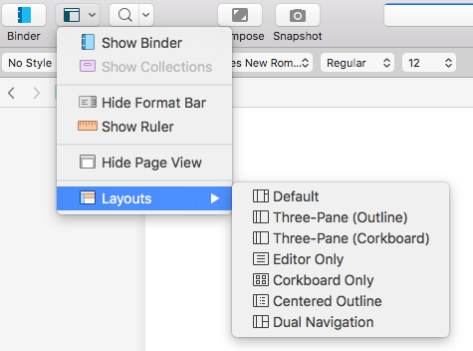 The “Dual Navigation” layout, for example, gives you three screens to work with. The left screen is controlled by the binder. The right screen is in outline mode, and when you click on a particular part of your outline, that document opens in the copyholder. This would be helpful if you wanted to simultaneously view two parts of your manuscript without having to click back and forth between the two editors.

While this is really cool in theory, I found it a little frustrating that the layouts can’t be customized. Once you’ve selected one, your editors are pretty much locked into the settings of that specific layout. I also wish there was a way I could create my own custom layout that I could then use as my default.

That said, I do think it’s worth trying out the layouts provided. Perhaps the feature is just not for me and others will find it to be a valuable tool.

Akshaya: One of the cool things about this update is that there different fields you can use for tracking your custom metadata. While the older version allowed you to input text, the new version also gives you the option of using a checkbox, a date, or selecting a choice from a drop down list.

I could see how the custom metadata could be useful for a number of things. I use keywords for for keeping track of side characters, important objects, and symbols, but that can get overwhelming. I feel like having more custom fields could possibly be a replacement for some keywords, allowing me to sort my manuscript in different ways.

Katy: I could also see it being a useful tool for outlining and keeping track of multiple plot threads, characters, or settings. You could also set individual due dates for specific chapters or sections and have them show up in your outline!

There’s a lot of flexibility with this, and I’m sure there’s a dozen more use cases you could come up with for your own needs.

Katy: I recently wrote a thread on twitter about line edits, and Scrivener’s new Linguistic focus feature is PERFECT for this. It makes it possible to highlight any part of speech in your documents, so as you read through you can pay special attention to adjectives, verbs, adverbs, etc. You can even use it to highlight dialog!

Here’s the scene I used as an example for line edits with all the verbs highlighted:

This can help you really hone in on word choice and see if you’re being repetitive or over-using a certain part of speech. For a grammar and linguistics nerd like me, this feature alone might be worth $25.

Katy: Ok, we need to have a come-to-Jesus moment about this new compile feature. Scrivener claims that the new compile is “much easier to use and also more flexible.” I am here to tell you all that these are LIES.

I recently had to send my manuscript back to my agent, a task that used to take me about ten minutes. With the updated compile, it took AN HOUR AND A HALF. First of all, much of the settings that control what your document will ultimately look like once compiled AREN’T EVEN IN the compile menu option anymore. They’re somewhere else completely! (For instance, I still do not understand how to add symbols between scene breaks.)

Second of all, once your document is compiled in Word or Pages or whatever word processor you’re using, the sections from Scrivener are preserved. Which like hey, maybe that’s useful for some people, but for me it meant that if I wanted to change the font size of the page numbers, I had to do it on EACH CHAPTER individually, which was obviously the worst.

I do not particularly think the old compile was that great, so this isn’t a case of a feature I liked being screwed up in the new version. This is a case of Scrivener taking what was arguably their clunkiest feature and somehow making it LESS user-friendly. And it’s true that the old compile feature took me a while to get the hang of, so maybe with more experience and tweaking of my settings the new compile feature could work well for me. But right now it just seems like a huge headache and not intuitive at all.

Akshaya says: Overall, I’m pretty pleased with the update. Visually, I love the simpler, cleaner look. And there are definitely some awesome new features that make things a bit more intuitive and more organized (like being able to control one editor with the other). The bottom line is, it’s not a whole lot different from the older version. But customizability is still the core of Scrivener, so if you do decide to upgrade, there is a lot you can play around with to make it your own.

Katy says: I agree with Akshaya. There are a few cool new features to like in the new Scrivener, and the updated design is nice. But overall, this is basically the Scrivener we know and love with a few extras (and a few more compile-induced migraines). If it were just a question of whether these new features are worth the extra $25 to upgrade, I would say probably not (although that Linguistic focus feature is…very fun). You might be able to do a few new cool things with organizing your manuscript & revisions, but overall it probably won’t make a huge impact on what you can do with the software. (YMMV, of course!)

However, this post is not just about writing process, but also technology. So if I put on my developer hat, I can tell you that deciding whether or not to upgrade really isn’t a choice about whether you want these few new features or not. In the world of technology, things advance, and the people who stick with the older versions will get left behind. It’s probably not going to happen in the next year, but eventually, support for Scrivener 2 will be deprecated, and you’ll basically be stuck working with an unsupported and increasingly buggy application. Eventually, it will make sense to pay the $25 to upgrade to Scrivener 3 just so you can continue to use the features in Scrivener 2 that you like. And as support for Scrivener 2 wanes, new features and fixes will be applied to Scrivener 3.

So if you see yourself using Scrivener for years to come, then I would go ahead and make the switch now or in the near future. You might as well get used to the new stuff now.

One thought on “Is Scrivener 3 Worth It?”